Culture creation is a central focus of Agile Learning Centers. We want to create and hold space that is safe for children to explore their passions. To create intentional culture we employ a weekly Change Up Meetings to build, update, and remix the culture inside the school. The central tool which makes this process explicit is the Community Mastery Board.

The CMB is a Kanban style board that normally has four columns:

Topics enter into the process as an awareness. Community members share something they are aware of. This could be a problem or an opportunity available to the community. At any time anyone can leave a sticky note on the awareness column of the CMB.

Each week in the Change Up Meeting items from the CMB are discussed as a group. As we reflect on each item in the awareness column the group attempts (if needed) to imagine a way to deal with the item and select one to try and move the note to implement. If we don’t have any ideas then the item stays in awareness.

Once a solution is implemented we try it out for the week or two. The items in the implement column are limited in number because we don’t want to be introducing too many new rules or procedures at once. Each week we reflect on how well each particular solution is working. Are people abiding by the new procedure? Is the community happy with it?

Rather than have a long processes driven meetings about the implemented solution where we voice concerns and attempt to codify a community agreement in one sitting we do rapid testing of our agreements. Over the course of the week new agreements are tested and community members can “vote with their feet” where if they like a particular agreement they can promote it during the implementation week, remind people that we are trying it out, and build support for it.

Once an agreement has been implemented we revisit it at each Change Up Meeting where we either:

Agreements in the practicing column are both in practice and being practiced. Each week we quickly review all items in this column to determine if they need to be demoted because they aren’t working or if we have mastered them.

If an agreement has reached a point where it has passed a certain threshold defined by the community it can then be elevated to the mastery column.

We ran our meetings by reviewing items in practicing first then implementation and finally awareness.

The following diagram illustrates how an item might move through this process: 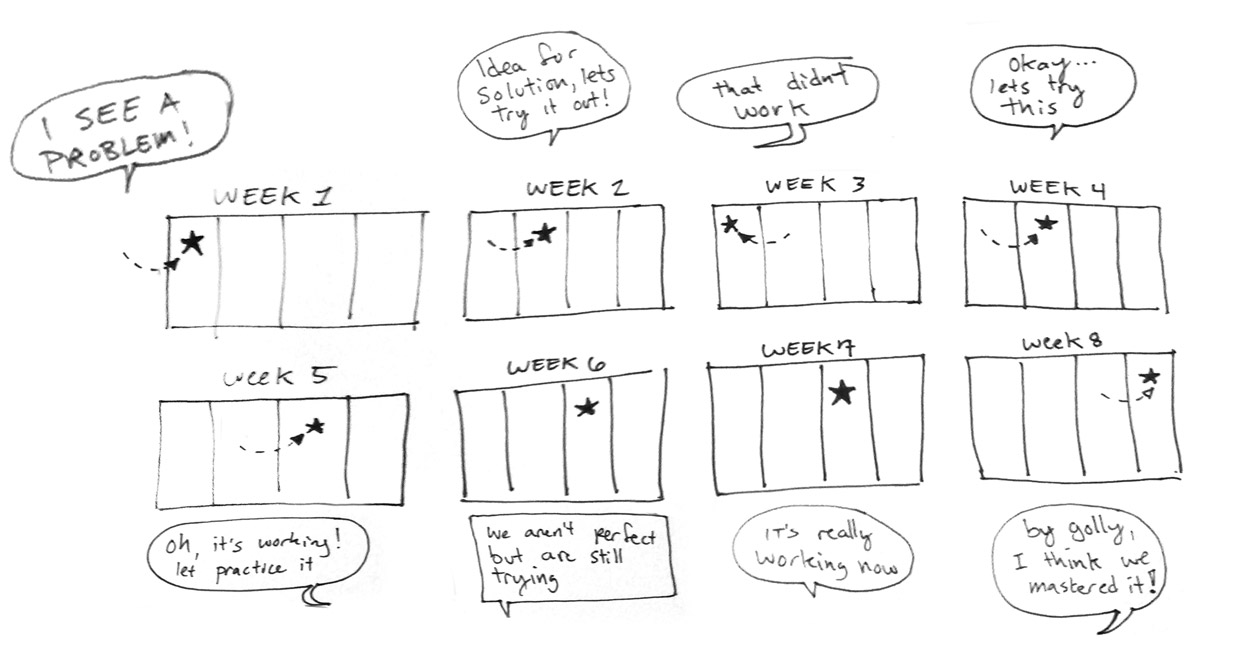 The items in the mastery column can then be presented to new people entering the space so they can understand the community agreements. This makes integrating new people into the community much easier because they don’t have to learn what our implicit rules are because we have made them explicit.

This process also helps keep our Student Agreement’s rule section short. There are only a few “base” rules which each student agrees to including this one:

Respecting community agreements we implement and practice from “Change-up”

Which allows us to collaboratively update agreements as needed without having to amend the Student Agreement.