The group kanban is heavily used by ALC Everett. It’s structure is similar to the personal Kanban but it’s focus is on group projects and tasks. It is functionally a lot like the offerings board in Agile NYC. It takes a central place in the school space and is where we hold our intention setting meetings.

The first version of the group kanban was drawn onto a white board. It had the typical columns:

On the far left was a column called “tracks” which contained three project area “swim lanes”:

The swim lanes formed rows across the board to give us some distinction between topic areas.

There was also a column called “awareness” which is part of the Community Mastery Board process, which I will ignore throughout this post.

This board was enough to jump start our process and was quickly iterated over in the coming weeks to create the version 0.2 Group Kanban.

The main alteration to this version was adding hour rows to the done column. This way we could indicate when during the day we planned to do certain activities. This evolution came directly from using the first board. We would organize our doing “list” chronologically so when I redesigned the board I “paved the cow path” by incorporating what we already did into the new system design.

After a few weeks of testing out the board we were ready to make our version 1.0

This new version of the Group Kanban added the offerings column where anyone could add offerings. These would then move into the flow of the kanban as we acted on them.

Issues with the Group Kanban

The Group Kanban wasn’t without issue. The main problem was that the board had a mix of tasks, projects, and activities all of varied scope. We ended up with sticky notes such as:

Each of these sticky notes required a vastly different amount of planning and subsequent tasks. What ended up happening is that only the easy one off tasks would move across the board to the doing column while the larger scope projects would just sit in the possible column as something we wanted to do, never to move on…

Moving to a Goal Oriented System

To solve the Group Kanban issue I developed system that incorporated goal setting into the Kanban. What follows is an untested concept for the Group Goals Kanban. 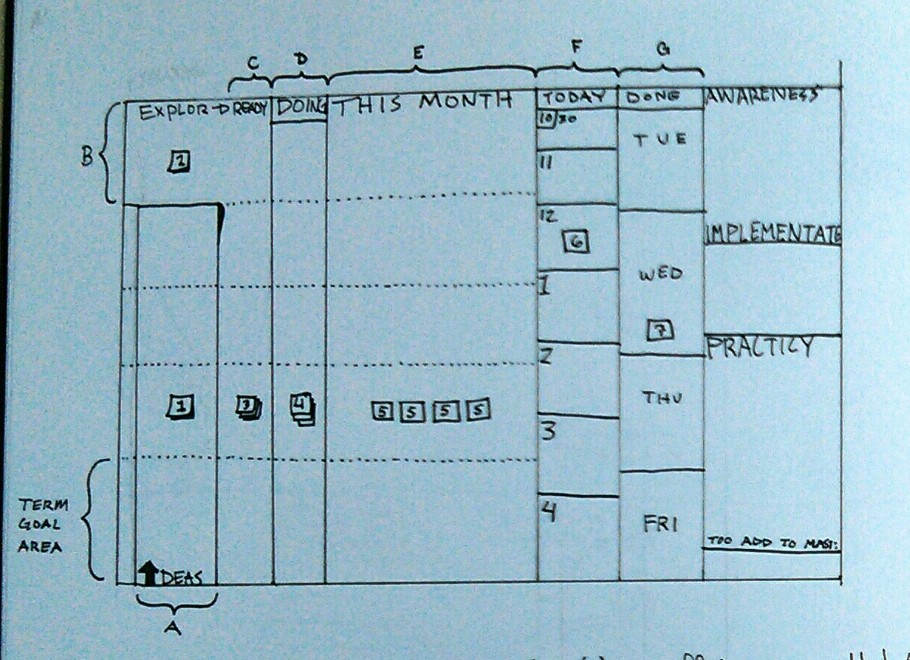 As you can see, from Today column to the right is much the same as v1. The new areas are labeled with letters.

I’ll go through the rough workflow for the rest of the board, you can follow along with the numbered “notes” on the above illustration:

Note: this process was never fully implemented and is thus untested.

There are other variations of group kanban boards. At ALC Everett we used kanbans for project and meeting management.

Below is the Web Dev Kanban that we used to create the Glacier Park Website and IXA.net. An extra column was added for Quality Assurance (QA) because we needed to test some tasks before committing them to done.

Next we have a picture of an impromptu kanban used for the first parent meeting. Topics for discussion were added to the left and moved right as we starting doing them. Topics that needed follow up or had tasks to do were assigned  to people in the tasks column. Using the kanban with a meeting made it very easy to visualize what we wanted to get done and recap what we had done and needed to do after the meeting finished.

Another impromptu kanban was used to sell a lamp. We quickly brain stormed what tasks needed to be done, each people took a task, added it to the doing column then set up to do it.

This made it very easy for other people to jump in and see what was going on and how far along we were to finishing the job.

Finally one of my favorite uses of the kanban was for our room by room clean up kanbans. Each room in the school (house) was assigned a kanban made from a folder. We spent some time going over the daily and weekly needs of each room and adding them to the kanban.

When someone set off to clean a room they knew exactly what they needed to do. As they completed each task they moved it to the done column. Once ever task for that room was finished they reset all the stickies and put it away for the next person.

This made a system that was easy to bring new people into. It kept single people from becoming the only ones who knew what had to be done in a particular room. Another example of making the implicit explicit. 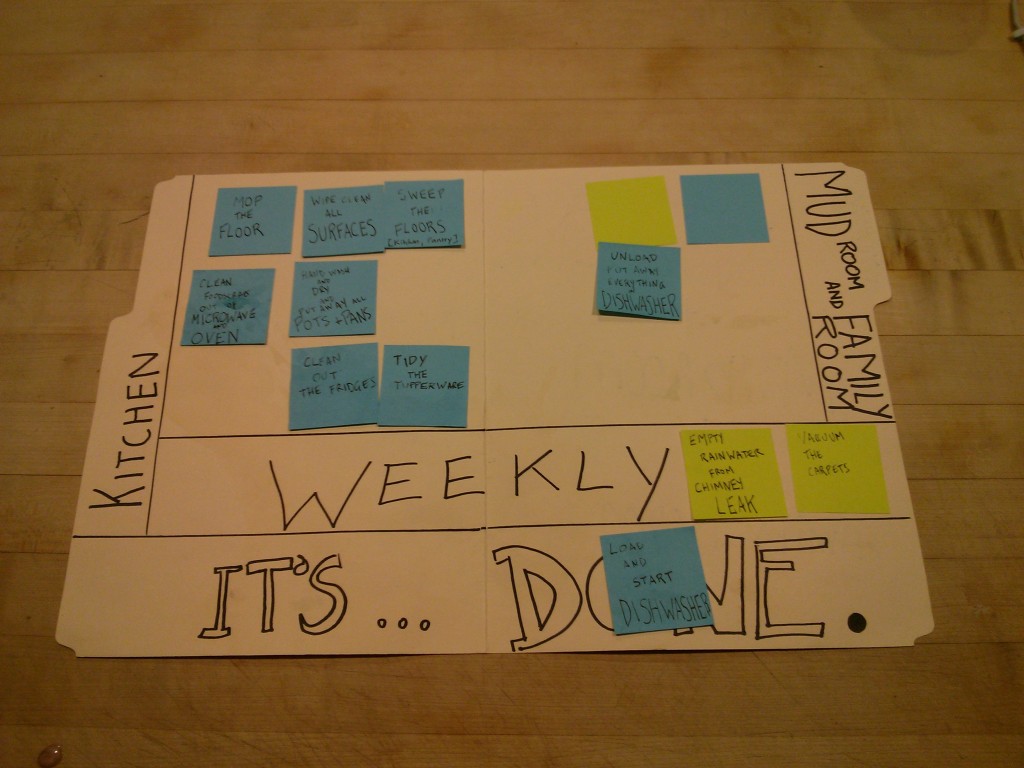