The key to having a robust learning environment is supporting the offering from anyone in the community to share their knowledge and skills. In our student agreement one of the privileges is:

We expect value to be created not only by parents, community members, and facilitators but also by the students. Soliciting and bringing attention to offerings is a primary role of the Facilitator.

At first the offerings process was very informal. Parents, students, or members of the community would directly make an offering, typically to me (the facilitator), or would simply mention it off hand and I would make a note and place it in the “offerings” column on our group kanban. From there I would periodically share it with the students

As the year went on it became clear that this offering process wasn’t working as well as it could. Long term and offerings of a larger scope had a hard time getting picked up.

The offerings that worked had either:

At the center of both of these paths is earnest enthusiasm. If someone is excited to do something it can, and will, excite the people around them. I’m not capable of making a good offering for Calculus because it doesn’t excite me. As such if we want to teach something we have to find someone excited to teach that something. This is a key role for the facilitator, to match enthusiastic teachers with students. I want to be explicit that the teacher title does not necessarily mean adult just as the student isn’t always a young person’s title.

The best example of a successful offering was cedar weaving with Sweetwater. The key areas of success:

After reviewing this offering I began to re-imagine the offering process with the help of parental input and visiting ALF (Agile Learning Facilitator) Abe’s feedback.

I wrote a blog post called Making Offerings Work where I introduced an upgrade to the offering process.

My focus was to create an offering system that made the offering explicit and encouraged students to make a commitment to meet the expectations of offerings that they were drawn to.

The simple addition to the process was a Offering Sheet (PDF). It has the following items:

Check out these examples: 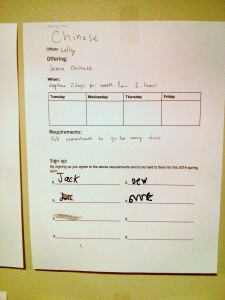 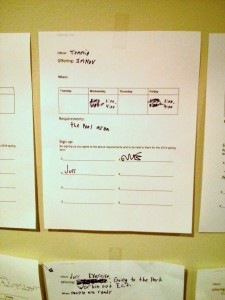 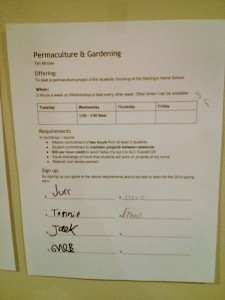 Lilly offered Chinese language classes any 2 times per week in the morning. She required that participants commit to attend every class. The students that signed up were essentially entering into a contract with the offerer. This contract makes the agreement between the offerer and participants explicit.

A vision holder is responsible for following up with the offerer and making sure students who sign up are held to account.

The initial tests of this method were very promising, however it wasn’t throughly tested in Everett and probably could be upgraded even further.